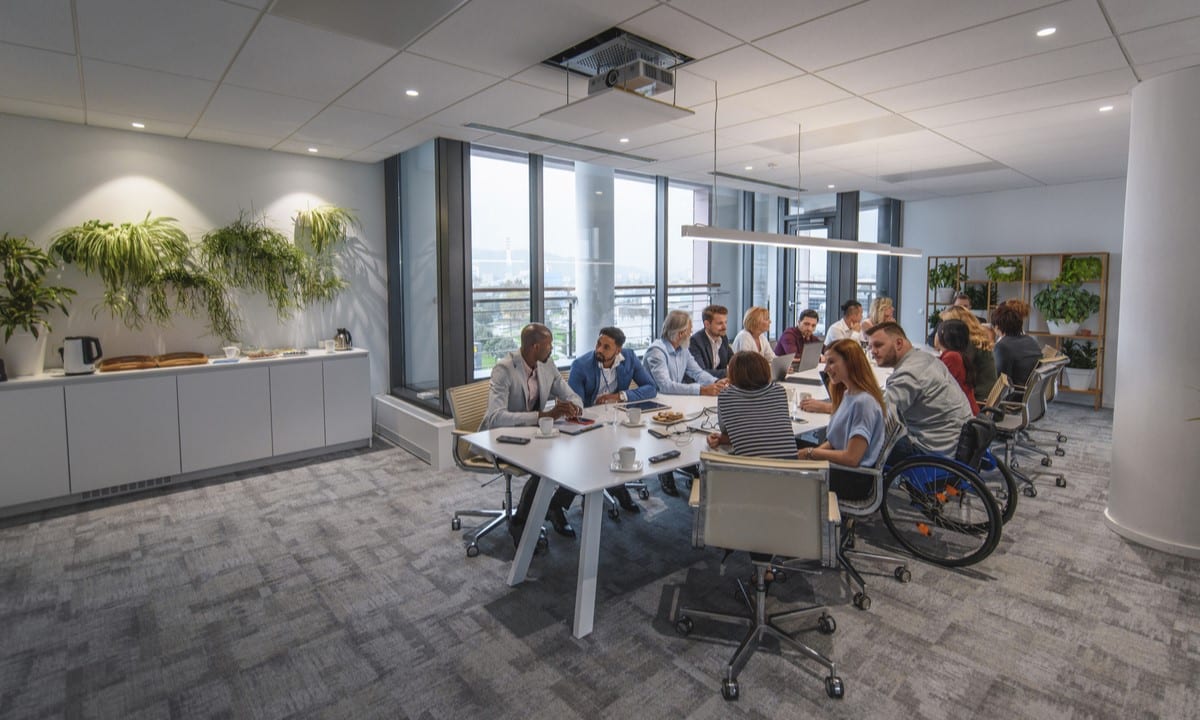 Encouraging collaboration within the food system transformation movement is one of Stray Dog Institute’s core priorities. We believe that collaboration builds the strength of our movement by helping advocates work together to increase effectiveness and by giving funders the knowledge to make more informed decisions.

The Roundtable on Animal Agribusiness Reform

Soon after our founding, Stray Dog Institute convened the Roundtable on Animal Agribusiness Reform. September 9–10, 2019, the Roundtable brought together roughly 30 academics, funders, and nonprofit leaders to identify opportunities for reform within the US industrial animal agriculture system.

The Roundtable provided a way to enlist the help of experts in the movement in setting our philanthropic agenda and an opportunity for dialogue and collaboration among leaders in the movement. The Roundtable’s collaborative process reached beyond the event itself; it included extensive preparation and continued discussion in a virtual setting afterward. This extended process contributed to the event’s success and Stray Dog Institute’s philanthropic agenda-setting. We wish to share our lessons learned with fellow advocates and funders here.

We approached planning for the Roundtable in three stages: framing, pre-work, and deciding who to include.

First, we considered how we could frame the complicated and interrelated issues of industrial animal agriculture in a way that would resonate with Stray Dog Institute’s theory of change, appeal to a range of experts from across the field, and elicit thoughtful conversation over the two-day event. We chose the frame “level the playing field” to highlight the unfair advantages afforded to the US industrial feed-meat complex by a combination of direct and indirect subsidies.

This frame resonated with our understanding of the food system at Stray Dog Institute and allowed us to bring together advocates for a better food system whose work ranged from fighting industrial animal agriculture to advocating for better supports for alternative proteins. The language of “leveling the playing field” recognizes that the fight for a better food system must include removing benefits for industrial animal agriculture and providing space and resources for alternative food production models to succeed.

We identified fourteen specific focus areas within these two categories, as shown in the table below. These issue areas were directly informed by the work of the Humane Society of the United States, FAIRR, The Greenfield Project, and others. The fourteen focus areas helped us articulate specific topics involved in “leveling the playing field.” 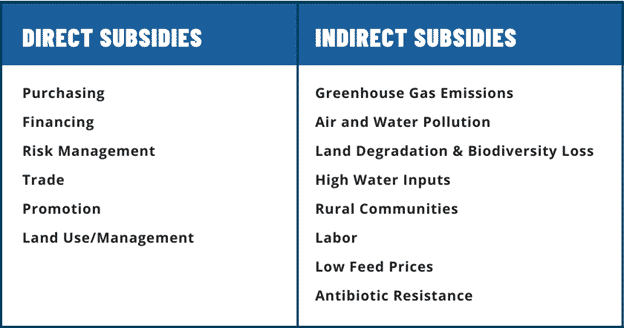 With the assistance of the Humane Society of the United States and others, we developed 1) a pre-work survey, and 2) a subsequent pre-read packet, which incorporated survey responses. The survey measured participants’ perceptions of each issue area’s relative impact and difficulty of reform and invited participants to share high-level insights. The pre-survey helped us improve our initial framing based on participants’ expertise. From the survey results, we then created an optional pre-read packet with an overview of the fourteen issue areas, a list of relevant federal and state-based subsidies for each topic, and participants’ anonymized insights.

We wanted to be able to fit the whole group around one (admittedly large) table to allow for a high level of full-group collaboration for the entire event. This limitation led us to cap the attendee list at about 30 people. In addition, we intended to invite individuals with deep expertise in various fields—for example, farmer advocacy, labor advocacy, and environmental advocacy—but with the willingness to look beyond their realm of expertise and create connections to the broader system.

While we knew participants would hold different views on many issues, we planned for Roundtable attendees to be generally mission-aligned with Stray Dog Institute regarding the harms of industrial animal agriculture. Alignment was important both as a contributor to group cohesion and to allow Stray Dog Institute to learn from movement experts while setting our philanthropic agenda.

To keep the Roundtable focused on the US, we primarily invited academics, funders, and nonprofit leaders whose work centered in the United States. With these criteria in mind, we created a list of invitees. If someone was not available, we tried to ask someone else with a similar field of expertise.

Once the Roundtable began, we used the framing of “leveling the playing field” and the fourteen issue areas to kick off a conversation about the most promising and needed areas of change within US industrial animal agribusiness.

Across the two-day event, participants engaged in full-group conversation and small-group breakouts about each issue area. The discussions incorporated all voices at the table and greatly benefited from the diversity of expertise in the room. By the end of the Roundtable, participants had collaboratively narrowed down ideas to seven priority topics (listed below) according to each topic’s potential for meaningful food system reform and need for increased attention from funders and nonprofits.

Roundtable-Identified Topics (not listed in order of priority)

Following the Roundtable, Stray Dog Institute took the seven topics attendees had identified and facilitated a week of virtual discussion for each issue with participants in an online forum. As many readers may already have experienced, building active constructive engagement over online platforms can be challenging. However, participants remained engaged across all seven weeks of discussion. We believe this was a result of 1) established rapport, 2) guided discussion with committed participants, and 3) creation of meaningful final products.

As mentioned above, participants had already established a sense of rapport and shared problem understandings at the Roundtable, which promoted engagement online. Rather than hoping the discussion would flow naturally, Stray Dog Institute provided structured facilitation for each week-long conversation and asked one or two Roundtable participant(s) to serve as the subject matter expert(s). Subject matter experts committed themselves to actively engaging in online discussions throughout their weeks to serve as models for participation and keep the conversation flowing.

Following the weeks of online discussion, Stray Dog Institute selected the three topics that we felt had the most urgency, the highest potential for positive change, and the strongest engagement from the group. These topics were (1) opposing so-called “biogas”—manure-to-energy schemes capturing waste from factory farms, (2) transforming our food system away from industrial animal operations and toward sustainable and ethical farms, and (3) reforming federally-sponsored “checkoff” programs geared toward the promotion of animal products such as meat and milk. We invited stakeholders from and beyond the Roundtable to join collaborative working groups focused on these three issues.

Below, we share three takeaways from organizing, preparing for, and facilitating the Roundtable. These insights represent our experience fostering meaningful collaboration in a group setting.

Meaningful pre-work is worth the effort.

The pre-survey and pre-read required an investment of time up-front for attendees and Stray Dog Institute. However, pre-work allowed us to “jump ahead” with content and maximize our time together in person. Importantly, the pre-work survey responses allowed participants to engage with each other’s thoughts in advance.

The process of creating the pre-work materials also proved a valuable learning opportunity for Stray Dog Institute. By identifying the fourteen issue areas and building the survey, we learned from similar work and sharpened our knowledge on the topics, bringing a more nuanced understanding to the Roundtable facilitation. Two years later, the pre-work documents continue to serve as valuable resources.

While the Roundtable was an overwhelming success from both our perspective and many attendees’, we later realized we could have done a better job of looking beyond our network. Most invitees were people with whom Stray Dog Institute or our co-hosts had existing connections. The primary reason for this was the sensitive nature of both the Roundtable’s planned topics and the attendee list; we wanted to ensure confidentiality leading up to the event. As a result, we invited participants who had a direct relationship with us or with someone we trusted.

It can be hard to expand beyond an established professional network when trust is essential. However, the Roundtable certainly reflected the lack of racial and ethnic diversity in the farmed animal movement (which groups like Encompass are working to change). Participants were overwhelmingly white and from well-funded organizations. Over the past year, Stray Dog Institute has been working to center equity and anti-racist thought and action in our work. We now recognize that exclusive, white-dominant spaces such as the Roundtable exacerbate exclusion, injustice, and white supremacy in our movement and that the way we planned attendance contributed to these inequities. We are learning from this experience to ensure that we do not replicate the same pattern in future gatherings.

IF possible, allow attendees to represent themselves.

One element that we feel helped the Roundtable discussion stay lively, open, and collaborative was that attendees were asked only to represent themselves, not their organizations. We heard from many participants that this allowed them to be more candid and open in the conversation since they were purely representing their personal views. This feedback was a valuable lesson for us and something we would encourage others to consider when planning similar events. Furthermore, the in-person nature of the Roundtable helped establish rapport and a positive, collaborative spirit among the participants. While hosting events has undoubtedly become much more complicated during the pandemic, once people can gather safely again, we see great value in in-person gatherings—particularly for smaller groups—to build a sense of trust and cohesion.

We hope that sharing how we organized the Roundtable and the lessons that we learned will be helpful to others in their efforts to build collaboration, particularly among funders and experts in their field. For our part, the Roundtable helped Stray Dog Institute strengthen existing relationships and forge new ones with experts in our movement. The organizing process also pushed us to reflect on how we can better embody our commitments to inclusion, diversity, equity, and justice. It also paved the way for meaningful collaboration and thought partnership with movement allies over the following two years. Our second blog post in this series will examine these collaborative efforts and discuss our lessons learned from hosting and facilitating strategic working groups around critical issues identified through the Roundtable.

[1] Examples of “societal advantages” in our planning process include cultural values and beliefs attached to the products of animal agriculture and consumer behavior influenced by agribusiness promotion programs and direct subsidies to the feed-meat complex.

As Stray Dog Institute’s Director of Food Systems Philanthropy, Lauren develops and executes Stray Dog Institute’s food system-related grantmaking, activities, and strategy. Lauren brings an academic and professional background in food systems and environmental studies to her work. Previously, Lauren worked for the Yale Sustainable Food Program as a Senior Advisor, Farm Manager, and Volunteer Coordinator, leading community engagement in food systems learning. Lauren’s work is motivated by a deep care for people, animals, and the environment and a lifelong interest in the interconnections between people and the natural world.

As Stray Dog Institute’s Director of Food Systems Philanthropy, Lauren develops and executes Stray Dog Institute’s food system-related grantmaking, activities, and strategy. Lauren brings an academic and professional background in food systems and environmental studies to her work. Previously, Lauren worked for the Yale Sustainable Food Program as a Senior Advisor, Farm Manager, and Volunteer Coordinator, leading community engagement in food systems learning. Lauren’s work is motivated by a deep care for people, animals, and the environment and a lifelong interest in the interconnections between people and the natural world.

Fostering Collaboration through the Roundtable on Animal Agribusiness Reform