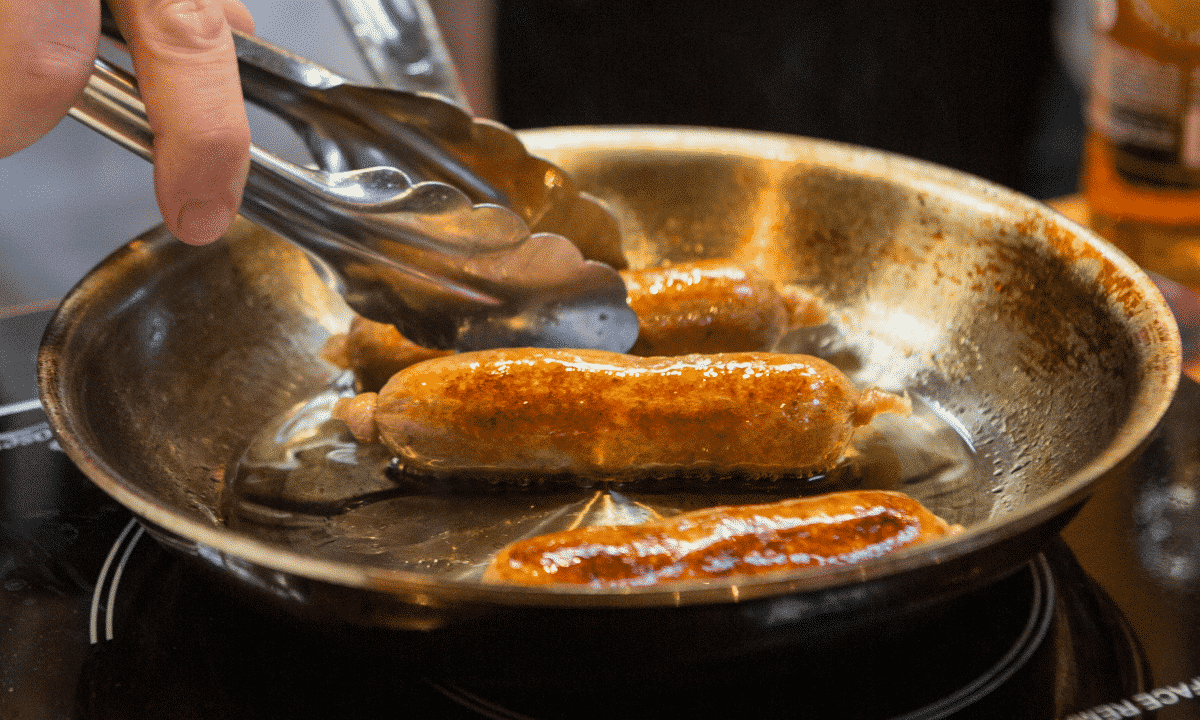 Food systems urgently need to address growing worldwide food insecurity while meeting consumer demand for protein sources that are healthy, humane, and environmentally friendly. In 2020, global hunger increased significantly, leaving one in three people worldwide without adequate food.[1] Meanwhile, world population is projected to reach 9.1 billion by 2050. Additionally, growing affluence for many is expected to lead to a growing demand for meat.[2]

The food systems that feed the Global North rely on industrial agriculture, intensive animal farming, and monocropping, and the global extent of these systems is expanding. These intensive systems have failed to address hunger and food insecurity while exacting a high cost in environmental damage and animal cruelty. Meat, dairy, and processed foods are heavily represented in the diets of higher-income nations, while vulnerable communities face food access disparities.

Cultivated meat is one proposed solution for providing nutritious sources of animal-based protein that do not require the inhumane confinement and slaughter of animals or the environmental damage of intensive animal farming.

WHAT IS CULTIVATED MEAT?

Cultivated meat is edible animal protein grown from cells in a bioreactor. Humans require protein for optimal health, ​​and true food security requires secure access to reliable protein sources in addition to adequate calorie intake.[4] Dietary protein does not need to be sourced from animal products, but some consumers prefer the taste of meat. Cultivated meat is intended to reproduce conventional meat’s structural, sensory, and nutritional values, satisfying consumers’ taste and nutrient requirements while removing the need to grow, process, and slaughter animals.

In vitro techniques have long been standard practice for growing tissues for research and medical applications. Many decades of advancement in stem cell biology and tissue engineering laid the basis for cultivated meat production. The first patent for a cultivated meat process was filed in the late 1990s, and in 1998 NASA grew goldfish meat in a laboratory while investigating food production for long-term space voyages.[5] However, these approaches did not prove commercially viable.

In the early 2000s, scientific interest in cultivated meat continued to grow, and the Dutch government funded projects to further the developing field. Mark Post, a researcher on these projects, revealed the first cultivated meat burger in 2013. Since then, scientific publications on cultivated meat have proliferated, and nonprofit organizations like the Good Food Institute (GFI) and New Harvest have emerged, promoting further development of cultivated meat technology.

There are currently over fifty startups devoted to further developing cultivated meat and seafood products and scaling in vitro production techniques.[6] In 2020, the first commercial cultivated meat product, Eat Just’s cultivated chicken bite, was approved for sale and offered at a restaurant in Singapore.

WHY USE THE TERM “CULTIVATED MEAT”?

There are many terms used to refer to cultivated meat, including “cultured,” “cell-based,” “clean,” and “lab-grown,” and the inconsistent terminology employed by companies, researchers, and the media can contribute to confusion over cultivated meat products among consumers. GFI is attempting to combat that confusion by standardizing terminology across the nascent industry.

GFI asserts that the word “cultivated” is ideal because it has broad consumer appeal and concisely describes a complex process. According to Barb Stuckey, Executive Vice President at Mattson, the US’s largest independent developer of foods and beverages for the retail industry, “The term ‘cultivate’ really works. A cultivator is where the cells are grown; cultivation is the process of allowing the cells to multiply; and cultivated can describe the final product, which is meat, poultry, or seafood.”

WHAT IS CULTIVATED MEAT MADE FROM?

Cultivated meat is made from the cells of an animal, which are then grown into the muscle, fat, and connective tissues that compose meat. Depending on the type of meat being made, the entire procedure of creating an edible, packaged product takes from two to eight weeks.

Producing cultivated meat involves four key components: 1) isolated muscle and fat cells from an animal; 2) a culture medium to grow the cells; 3) a scaffold to mimic the structural properties of muscle and other components of meat; and 4) a bioreactor for cellular growth.[7] These components are used in steps, beginning with cell acquisition and ending with final products.

First, animal stem cells are acquired from an animal via tissue biopsy or from an embryo. Cell cultivation uses stem cells because they can go through repeated divisions and differentiate into the many types of cells that make up meat. Although other tissues are also present in conventional meat, skeletal muscle and fat cells are considered the minimum required components of cultivated meat.[8]

Once cell lines have been established or selected, the cells undergo two processes: proliferation and differentiation. In these processes, they are exposed to enzymes and nutrient baths that promote growth and differentiation into muscle or fat cells, depending on the cell line used.[9] These processes occur in bioreactors, which can be used in several possible configurations.

In the proliferation phase, cells grow by repeatedly dividing within a nutrient-rich medium inside structures called seed train bioreactors. The purpose of these bioreactors is to generate a cellular mass large enough to be moved to production train bioreactors.[10]

In the differentiation phase, cells enter production train bioreactors, where different types of nutrient media trigger differentiation into muscle, fat, or other specific tissues. To develop the structural and mechanical elements of muscle tissue, cells must have a mechanical stimulus—essentially, they need to feel movement. Technicians can achieve this by placing cells on collagen hydrogels which help to achieve the appropriate tension.[11] Cells may also be attached to 3D scaffolding, which causes them to mimic the structure and texture of meat.[12]

Once the cells have sufficiently differentiated, the desired products are harvested from the bioreactors using centrifugation and filtration. The products must also undergo purification to meet quality control standards.

Cultivated meat offers many potential benefits. Products produced through cultivation would not rely on breeding and slaughtering animals, alleviating animal cruelty concerns. Wide implementation of cultivation also provides solutions for environmental issues that plague industrial animal farming, including air, soil, and water pollution and high greenhouse gas emissions.[13] Cultivated meat could also improve food safety by reducing the risk of foodborne illness caused by pathogens such as E. coli and Salmonella and decrease the likelihood of future infectious disease pandemics caused by the farming and consumption of animals. Lastly, cultivated animal cells can be produced without reliance on the routine antibiotics commonly used in industrial animal farming, mitigating the global risk of antimicrobial resistance.

Despite these potential positive impacts, large-scale consumption of cultivated meat faces many hurdles. Companies must develop scalable processes that are cost-effective. The Good Food Institute has identified four critical areas that require advancement before cultivated meat can be widely commercialized: cell line development, cell culture media, bioreactors and bioprocessing, and scaffold biomaterials.[14] There are also several technical challenges in replicating particular features of meat, including fat marbling, color, and the integration of multiple cell types.

Cultivated meat comes from the cells of animals, and several steps in the process required to create cultivated meat are also not currently animal-free. Nutrient media needed to grow cells are made from fetal bovine serum and other products taken from animals. Scaffolding and hydrogels may contain bovine collagen. However, for consumers interested in reducing animal suffering while still eating animal meat, cultivated meat may one day provide a good option.

In an attempt to better align cultivated meat production with the goal of enhancing animal welfare, the Good Food Institute promotes research and development of plant-based and fungal-based polymers and animal-free nutrient media for cell cultivation.[16]

WHEN WILL CULTIVATED MEAT BE IN STORES?

Another important issue affecting the commercialization and distribution of cultivated meat is cost. To replace conventional meat, cultivated meat must be affordable and ideally cheaper than meat from farmed animals. Cultivated meat is currently costly to make, but proponents of the industry believe prices can come down with continued investment in improved technologies. In a study commissioned by the Good Food Institute and carried out by CE Delft to examine the issue of lowering the price point, data from startups showed that the cost of production could potentially be reduced from $10,000 per pound to $2.50 per pound in less than ten years.[17]

Cultivated meat also faces regulatory hurdles, and companies may need to adhere to different regulatory requirements in different international markets depending on a given country’s food safety laws. Regulatory friction points include the ability to label and market cultivated products as meat.[18]

IS CULTIVATED MEAT GOING TO SOLVE OUR AGRICULTURE PROBLEM?

Despite the growing popularity of plant-based meat analogs, there may continue to be a market for large-scale animal slaughter until companies develop cost-effective alternative meat sources. If it can overcome technical challenges and deferred timelines, cultivated meat could become part of the solution to the urgent issues of animal agriculture.

Widespread adoption of cultivated meat in place of slaughter-based meat could free up land used for raising industrial animals and growing their feed crops. This change in land use could allow for alternative land uses, including sustainable plant-based food production and environmental recovery. A shift away from conventional meats would also decrease the number of animals slaughtered in industrial animal agriculture. However, until technology advances sufficiently to allow for the transformation of the conventional meat industry, these benefits remain theoretical.

There is also the challenge of feeding the growing cells, which need amino acids to differentiate into muscle and other tissues. Global food-grade amino acid production is far too low to provide the amounts necessary for large-scale cultivated meat production. Soy is a potential source of plant-based amino acids that would be cheap and easily accessible.[20] However, sourcing large amounts of soy protein within the current food system supports the continued destructive practices of monocrop industrial farming, which is a significant driver of soil erosion, climate change, and water pollution.

Given the widening disparities in food equity and access, the impacts of climate change, and the animal cruelty inherent in intensive farming practices, it is evident that the prevailing conventional approaches to food production require replacement. Innovative food sources like cultivated meat may one day help address some of the problems brought on by industrial agriculture, but only if they prove to be sustainably scalable and widely accessible. While the industry is still in the early stages of technological development and faces significant obstacles to achieving widespread availability, cultivated meat holds promise for upending the conventional meat production paradigm and eventually replacing the cruelest and most environmentally damaging forms of animal farming.

The Changing Economics of Farming