Vegetarians and vegans in the US can now enjoy more options than side salads and tofu, whether at summer barbecues, fast-food restaurants, or grocery stores. Sausages, hamburgers, and other types of meat made entirely of plant-based ingredients are becoming commonly available across the country.

Many of the latest plant-based meats so closely resemble conventional meat in their taste, appearance, and texture that they fit easily into the diets of omnivores—not just vegetarians and vegans. These products are not novelties but instead are making a significant difference to human health and the environment.

WHAT IS PLANT-BASED MEAT?

Plant-based meat refers to products that mimic animal flesh—and processed foods traditionally made from animal flesh—but that are created using only ingredients sourced from plants.

While these products can be enjoyed by those who choose to abstain from meat or animal products altogether, many of today’s plant-based meats are primarily being marketed to omnivores, who constitute the majority of the US consumers. A 2020 Gallup poll found that over 40% of US consumers had tried plant-based meats, and more than half of those consumers planned to continue eating plant-based products in the future.

Expanding the reach of plant-based meat beyond consumers who identify as vegetarian or vegan and successfully capturing the interest of omnivores and casual meat-reducers could create a much more significant reduction in overall societal meat consumption than only marketing to vegetarians and vegans. Lowering average meat consumption across all consumer groups is particularly important in wealthier nations like the United States, which currently leads the world in yearly total meat consumed per person. 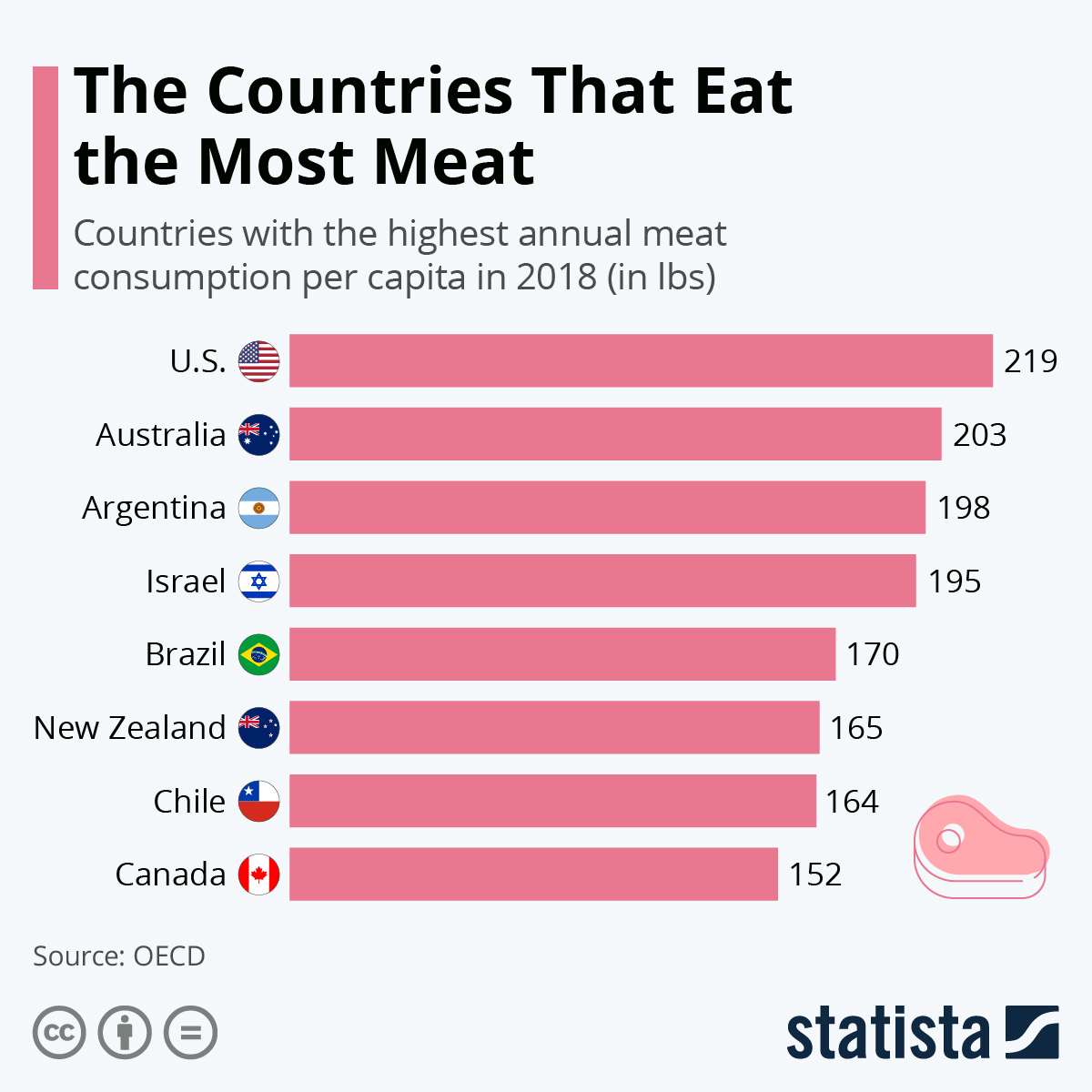 Drivers of the Plant-based Meat Industry

The roots of plant-based meat development and the drive for societal meat reduction are manifold. Many producers and consumers of plant- based meats articulate combinations of motivations related to public health, animal welfare, social justice, and environmental protection.

Public health motivations include the search for solutions for the high burden of diet-related chronic disease. For example, cardiovascular risk has long been linked to the overconsumption of animal-based foods,[1] and controlled trials have shown that switching to plant-based meats can improve cardiovascular health.[2]

Motivations related to justice and compassion center on the harm inflicted on animals, people, and farming communities by animal-based meat production. Animal welfare motivations include the immense and unnecessary suffering that billions of animals undergo each year in US Concentrated Animal Feeding Operations (CAFOs), from chickens caged for egg production to cows separated from their young at birth by the dairy industry. Related social justice concerns center on the exploitative and physically dangerous conditions that characterize work in US meat processing facilities and the negative impacts that industrial food production—particularly animal farming—have had on agricultural communities.

Environmental motivations focus on the severe ecological damage caused by industrial meat production. Globally, the meat industry accounts for a significant percentage of total greenhouse gas emissions, is a primary driver of deforestation, requires vast amounts of land, and causes immense land and water pollution. Compared to animal-based meat, plant-based meat requires far less land to produce and is significantly less polluting to the environment.[3] Especially where producers use renewable energy resources and plastic-free packaging, plant-based meat production can have far fewer impacts on the environment.

There are two basic categories of plant-based meats: restructured and whole muscle.

Restructured plant-based meats include emulsion-type products such as hotdogs and bologna modeled after highly processed animal-meat products, as well as burgers, patties, and nuggets that mimic ground animal flesh.

The goal of whole-muscle plant-based meats, on the other hand, is to achieve the look, feel, and taste of complete cuts of animal-based meat like a steak or chicken breast. In these instances, cartilage, striations in the muscle tissue, and other structural features of animal muscle are integral to the taste experience of animal meats and present a challenge for plant-based meat developers.[4]

Plant-based meat companies produce alternatives for the most popular types of meat within their distribution region to gain access to the largest potential markets. The more people these products can reach, the more plant-based entrepreneurs will be able to do to lessen the social and environmental burdens arising from meat consumption.

Plant-based meat products are becoming increasingly popular in the US and are being pitched as replacements for the flesh of a range of animals:

Although the plant-based meat sector as a whole is experiencing substantial growth and record investments, there are a number of challenges companies must overcome. One of the biggest hurdles is achieving price parity with conventional meat products, which is crucial for gaining widespread market adoption. Improving taste is another challenge that companies are working to address, along with creating authentic textures—particularly that of whole-muscle products.[5]

WHAT IS PLANT-BASED MEAT MADE OF?

The stems, leaves, and roots of plants may appear to possess few similarities with the bodies of the animals that people regularly consume. Yet many of the key nutrients present in animal flesh that make up its nutritional profile and create its taste, texture, and appearance are also present in plants. These include vitamins, minerals, fat, and protein. Plant-based meat companies create meat analogs by combining plant ingredients and rearranging their nutritional building blocks into products with the look, feel, and—increasingly—the taste of meat.

Legumes such as peas and soy, and grains like rice and wheat, are currently the most popular choices of basic ingredients in the plant-based meat industry due to their high protein content. However, producers are exploring new formulations containing crops such as millet, which may be more efficient at delivering protein. The first iterations of plant-based meat production exploited “side streams” from established food supply chains, for example, making use of soy proteins left over from oil production. But as the plant-based meat space grows, it is increasingly developing its own dedicated supply chains, with the power to restructure agricultural economies.[6]

Products can contain a range of ingredients depending on the sort of look, feel, and taste they aim to achieve. Companies can also use proprietary blends of spices and other ingredients to make their products unique. Below are a few of the basic ingredients of both restructured and whole-muscle plant-based meats.

Restructured plant-based products mimic the texture and appearance of conventional emulsion meats like hotdogs and mortadella, or ground meats like hamburgers and chicken nuggets.

Soy protein is the most popular ingredient when creating products that mimic animal muscle, whether used in concentrated or isolated form. Formulations typically rely on liquid oils (such as sunflower oil) and rarely require binders. As with restructured products, various colorants and flavorings are commonly added to evoke the taste of meat.[7] As part of a healthy diet, plant-based meats should be consumed in moderation, along with a varied and balanced array of whole plant foods.

Humans are capable of digesting a range of foods but can attain optimal health on primarily or entirely plant-based diets. Individual constitutions vary, however, and some people may be naturally more biologically suited to plant-based diets than others.[9] Especially compared to the standard American diet, plant-based diets rich in whole plant foods tend to be beneficially high in fiber and critical nutrients such as vitamins C and E, along with magnesium, folate, thiamin, and potassium.

While there are certain nutrients that occur principally in animal products, such as vitamins B12  and D, science has demonstrated that people cannot be strictly carnivorous while maintaining optimal health.[10] Furthermore, findings suggest that even an omnivorous diet abundant in meat and animal products can raise the risk of significant health problems.[11] These same diet-related health problems are increasingly widespread in higher-income countries like the US, where meat products feature heavily in daily consumption patterns.[12] For people suffering from health conditions such as high blood pressure, high cholesterol, and coronary heart disease, reducing meat consumption with the help of plant-based meat substitutes may provide health benefits.

Compared to conventional meat, plant-based meat may also improve human health because its production facilities are far less polluting than the concentrated animal feeding operations (CAFOs) that produce the vast majority of US meat. CAFOs cause significant air, land, and water pollution that directly impacts surrounding communities and the broader ecosystems upon which all humans depend. Plant-based products avoid many of the environmental impacts of industrial animal agriculture and produce fewer greenhouse gas emissions.[13]

The number of plant-based meat companies has been growing rapidly in recent years as scientists, researchers, and entrepreneurs seek to take advantage of the multibillion-dollar market for alternatives to meat. Below are some of the biggest companies currently defining the field:

Growing public interest in plant-based meat indicates the alternative meat sector is here to stay, with the potential to play a role in reducing both the negative public health risks and the serious environmental impacts associated with conventional meat production. A world in which the majority of burgers, sausages, meatballs, and fish fillets come from plant sources rather than from animals will likely be both healthier and far more environmentally sustainable.

Disclosure: Stray Dog Capital, part of the Stray Dog family of organizations, invests in early-stage companies across the food, beverage, and biotechnology sectors.

The Potential Benefits and Pitfalls of Plant-based Foods

The Impact of Consuming Animals